“The safest thing for a blind person to do is to sit still. I ain’t sitting still.” – Thomas Panek, CEO, Guiding Eyes for the Blind.

Technology is best when removing barriers for people and making what was impossible possible.  Project Guideline from Google Research is helping blind people run and walk without the need for guide dogs or canes.  “Freedom” is the word most used by the project participants.

Project Guideline uses a machine learning algorithm to constantly look for a line and send an audio signal to the user’s headphones to help them calibrate their direction and follow the line. This can be used to successfully guide blind people through a route despite changing lighting conditions or objects that obstruct the line.

The prototype was tested when Thomas Panek used it to run in a 5km event in New York’s Central Park.  Thomas’s reaction to being able to run on his own for the first time in decades (in the above video) just shows how great technology can be.

Seeing is believing. But what if what you see is not what you believe it to be? Would it surprise you if I told you that person at the beginning of this article does not exist? The photo is just one of countless photos easily rendered from https://thispersondoesnotexist.com.

To come up with a fake photo, the site’s creator, Philip Wang, uses generative adversarial networks or GAN. The generator recreates the original image while the discriminator distinguishes the original from the fake. After being trained against millions of images the algorithm develops the abilities to create hybrid images based on what it has been trained on.  In a world where images are increasingly relied upon as proof that something happened, we need to be aware of the fact that the images may not be real at all.

“I just hope my demonstration raises awareness. Those who are unaware are most vulnerable to this technology,” said Wang

There are so many potential applications for this GAN technology and they range from the incredibly helpful to the downright terrifying.

So the takeaway? I never say this but be like the algorithm.  Have a generator (be willing to produce and believe) and a discriminator (don’t believe everything you see on the internet). 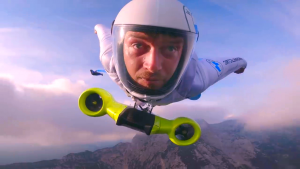 Look up in the sky! It’s a bird. It’s a plane. No, it’s Peter Salzmann with his electrified wingsuit!

BMW, Designworks and Salzmann teamed up to create this prototype electrified wingsuit. It consists of two carbon impellers worn as a chest piece. It packs around 15kw and can reach up to 300 km/h. As a comparison a “normal” wingsuit operator might get to 100km/h.

As part of the flight Salzmann managed to gain altitude to cover more distance, a feat impossible in an unpowered wingsuit. My Iron-Man-obsessed 10 year old is a step closer to realising his dream.

To fly this wingsuit, you are given controls for throttling, steering and an on/off switch – just like in a car. Salzmann next plans to attempt to fly between the skyscrapers of South Korea but wisely adds that he should probably train more!

With flying cars and flying people, it looks like the skies of the future might be a little busy!