0 or 1.  True or false.  Mutually exclusive bits.  That’s all your average supercomputer considers.  In quantum computing however, we can have 01 or 10 as qubits. We can store information in true and false – at the same time.   Why do we care? Stick with me!

This week a group of Chinese physicists have demonstrated a quantum computer that performs calculations that would take China’s best supercomputer 2.5 billion years, in less than 4 minutes!  This quantum computer called Jiŭzhāng has become the second project to claim “Quantum Advantage” after Google’s Sycamore computer did in 2019.

The yardstick challenge for quantum computing is called boson sampling. In simple terms, the computer needs to predict where photons would end up after they are fired through a series of slots, beam splitters and mirrors. Due to the nature of photons, there are many unknowns involved in making this calculation such that would bog down any existing conventional computer.  Jiŭzhāng did it’s calculations using photons of light and correctly predicted the location of 76 photons.  The previous record was 5!

If you’ve made it this far, you are my kindred spirit in nerding-out over the theoretical!  The important thing is though – how can it help?  Quantum computing’s speed can help in molecular engineering which leads to better and faster medical drug discovery and synthesis. Industries are employing quantum computing to make vastly improved batteries for our electric vehicles.  Microsoft is looking to quantum computing to produce fertiliser in a planet-friendly way.  Currently fertiliser is made by pressurising atmospheric nitrogen into ammonia and this accounts for 1% of global greenhouse emissions.  All of those potential outcomes make quantum computing worth investing in. 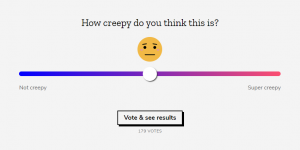 Smart gadgets are easy to overlook. We buy a smartphone, a smartwatch or a smart speaker then connect them to the internet. It’s pretty straightforward and easy. But, as regular readers will know there are privacy issues that come with smart tech.  These gadgets may harvest your personal data and use or sell them. So how can we protect ourselves? Enter Mozilla’s *privacy not included website.

*privacy not included is a tool to to help you find out which gadget is safe and which isn’t in terms of privacy issues. It also warns users about whether a product handles their data according to standards or not. And it includes a wonderful “How creepy is this?” metric. Here are some of the questions it answers:

For example, this particular smart coffee maker has a warning about its data policy because it isn’t clear whether it allows you to delete your data or not. Who would ever think that a coffee maker may pose a risk to your privacy! So if you want to shop smart for your Christmas smart stuff, don’t forget to check *privacy not included first.

Imagine if your Ikea furniture could assemble itself!

3D printing has been around for a few decades now. We’ve printed stuff from toys to orthopedic implants. But it’s time to add one more “D” to 3D. Here’s 4D printing.

4D printing is still 3D printing but with one added factor: the 3D printed material reacts to stimuli. For example, in the video, we see a bent model of the Eiffel Tower straighten itself when heat is applied. Another printed material forms a cube when submerged in water. That’s 4D printing.

So I arrive home after fighting with my family in Ikea for 3 hours (after having actually found the way out), and face the dreaded prospect of flat-pack assembly.  But now I take the furniture out of the box and it reacts with the oxygen and forms itself up! We could even have buildings that respond to temperature changes throughout the day to allow for better ventilation. Or even 4D print a component to easily transport it to space where it unfolds itself!

I’m curious, what would you like to have 4D printed?