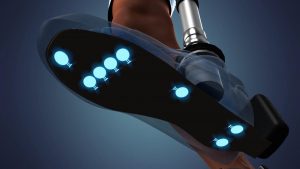 The brain has an astounding capability to adapt to new inputs.  As regular readers will know, we are constantly discovering new ways to feed the brain sensory information.  We can send people sounds through touch, vision through audio and now tactile feedback from a prosthetic leg. The challenge with prosthetics is to make them feel like the original limb.  A common complaint from amputees is that their prosthetics feel too heavy, despite the fact that the prosthetics may weigh less than half of the original limb.  This is to do with the absence of signals that would normally be being sent back from the limb.

Researchers led by Stanisa Raspopovic from ETH in Zurich, Switzerland has developed prosthetics that integrate with the nervous system and can provide information back from the prosthetic to the brain.  Electrodes are implanted in the thigh and connected to the leg nerves enabling the prosthetic’s tactile sensors to provide feedback through electric pulses. Tests show that amputees perceive such prosthetics as lighter by about half a kilo (500 grams) enabling them to have faster, safer walking with less conscious effort.

As Raspopovic says, “Our results also suggest that, quite fundamentally, it can take the experience of patients with an artificial device closer to that with a natural limb.”

I know, Daniel’s banging on about the perils of facial recognition again! However my previous hypothetical has now been realised.

A man in New Jersey, U.S.A has been imprisoned for 10 days because facial recognition software wrongfully identified him as the suspect in a robbery case despite him being nowhere near the area. When Nijeer Parks learned about the warrant out for his arrest, he showed up at at the police station to sort it out where he was handcuffed and arrested.  The police had the face of the suspect from a security video which they fed to the facial recognition software (officially we don’t know which one *cough* clearview.ai *cough*) which turned out a match. According to Mr Park’s attorney, his client was pursued and charged based only on the facial recognition match. After a challenge all the charges were dismissed and the city of New Jersey has directed police to stop using this technology.

Experts have been arguing against the use of facial recognition software for some time due to unreliability, especially when trying to identify people of colour. This is not the first occurrence of this issue and it seems too much trust is being placed in a technology that is not yet fully mature. I’m not suggesting never to use AI in police work but surely it should be used in conjunction with more traditional investigation methods.

If you’re not a great artist, or you have problems representing your ideas visuall,y just type “an avocado armchair” and boom! 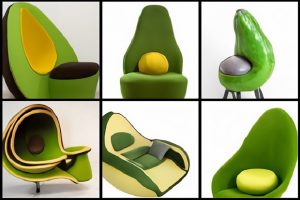 Ok weird example, but the above images were created automatically using Image GPT-3.  You may have heard of GPT-3 which is now being used to automatically write long articles mimicking those which would be written by a human. Well Image GPT-3 can automatically create us an image based on a description.

DALL-E (gotta love nerds naming things) is a software model that draws an image based from a prompt. It is trained on images and their accompanying text captions from the internet.  Given a prompt the software will create a series of images based on what you need.  As the linked article says

“The results are striking, though still a mixed bag. The caption ‘a stained glass window with an image of a blue strawberry’ produces many correct results but also some that have blue windows and red strawberries. Others contain nothing that looks like a window or a strawberry”

Text to images provides a lot of challenges but the progress being made may be providing designers and illustrators with cause for concern.