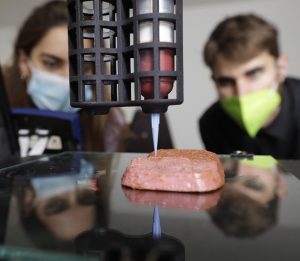 Commercial meat production is considered one of the major contributors to environmental damage. Raising livestock, land-use, water-use, refrigeration and transport being the main culprits. How would you feel about a product that skips most of those steps and can be 3D printed?  Spanish startup Novameat is pretty close to doing exactly that.

The 3D meat printer uses water, plant proteins and vegetable fat and they are currently printing slabs of meat that tick the boxes in terms of texture and look. The main focus of the work now is perfecting the taste which the CEO admits is “not quite there yet”. Which seems a bit of a strange approach to me – if it tastes right does it really need to look like a traditional steak?

However, the technology is promising and Novameat is looking to roll out a series of printers as soon as this year! If restaurants can print their meat instead of stocking them in cold storage, they can better adapt to supply and avoid the massive food waste prevalent in the industry. Also, if Novameat can overcome that final hurdle and get the taste right it may even convince Gordon Ramsay that vegan meat is worth giving a shot.

Whilst the SuperBowl was the biggest news coming out of Tampa Bay, Florida this week I am astounded that this story hasn’t been shouted from every news network everywhere. On February 5, around 1:30 PM someone hacked into a water treatment facility in Oldsmar, Florida and increased the levels of sodium hydroxide – used to control the water’s acidity – from 100 parts per million to 11,100 parts per million. Enough to make people sick and damage the pipes.

From the referenced article…  “Contact with sodium hydroxide can kill skin and cause hair loss, according to the National Center for Biotechnology Information. Ingestion can be fatal.”

Fortunately the story has a happy ending due to the vigilance of the operator on duty and the failsafe systems that were in place to counteract the deadly changes. Investigations reveal that remote access software TeamViewer was used for the hack. This despite TeamViewer not being suitable for critical infrastructures.

This should serve as a huge wake-up call for anyone who provides external access to their software systems – which lets face it is everyone!

Hyperloop to the Future

It was all the way back in 2012 when Elon Musk and his mates published the original concept of a sealed, pressurised cabin travelling through reduced-air-pressure tubes, at airline style speeds. And I’m still waiting… Seriously give me this and the hoverboard and I’ll be sweet.

With heavy traffic costing billions of dollars to the economy, and many hours to us poor suckers, the Hyperloop seems like the transport solution we’ve been waiting for. Here’s the latest concept video from Virgin Hyperloop One which has got me excited all over again:

With speeds of up to 600mph, cities will be more connected than ever and travelling around will be faster and easier. I’ve been waiting for the hoverboard for longer, but maybe the Hyperloop will get here first.  Not time to start holding our breath yet, but we can hope!