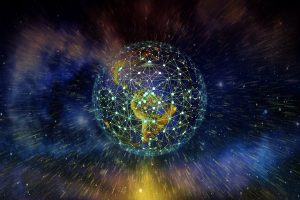 Our planet is one big delicate and interconnected ecosystem. Every change we make has unforeseen side effects which are difficult to model. A case-in-point is China’s Three Gorges Dam project which cost billions and produced results that were either negligible or catastrophic depending on who you believe. How can we accurately model the expected impact of any major infrastructure or environmental project?

Project Destination Earth, an EU funded project, is building our planet’s digital twin. A simulation platform that can provide an accurate forecast of the earth’s future. A digital representation that can calculate the impact of a certain activity.

“If you are planning a two-​metre high dike in The Netherlands, for example, I can run through the data in my digital twin and check whether the dike will in all likelihood still protect against expected extreme events in 2050.”

Destination Earth will allow us to model and test scenarios to assess with high accuracy, which projects are worth completing and which will truly benefit the planet long term. The team is looking to have 5 “digital twins” up and running by 2025  and say the combination of these will give us a full simulation of this amazing place we all live in.

We all know who Tom Cruise is, but can we spot a fake Tom? And is fake Tom or real Tom creepiest? Over at TikTok, user @deeptomcruise is posting deepfaked Tom Cruise videos. We have talked about these videos before and they are advancing so quickly it is a little scary.  If you didn’t know it was fake, this post would pass off as the real deal:

2 years ago on stage I was asked “when will Deepfake video/audio impact trust & be believable in social engineering?” My response then was that we were 2 years away from undetectable Deepfakes. I wish my prediction then was wrong. We need synthetic media detection + labels ASAP. pic.twitter.com/yUUOTDepYY

With deepfakes infiltrating social media, lies (I refuse to use the term “fake news”) are ever easier to spread. Given how quickly posts can go viral now, being able to make anybody say anything, and having it look real could cause significant issues. Imagine a declaration of a nuclear war by Vladimir Putin. Or even worse, Nickelback announcing a new album!

What can we do? As pointed out in our 17th edition, Philip Wang, creator of thispersondoesnotexist.com says, “I just hope my demonstration raises awareness. Those who are unaware are most vulnerable to this technology.”

Raising awareness will help prevent the public from being misled by deepfakes.  That’s what we’re trying to do here.  More importantly the detection software needs to keep pace with advancement in deep-fake production.  Social media sites need to add labels to accounts that use deepfake media and highlight potential fakes on their platforms. In the meantime you can use tools such as https://deepware.ai to validate that what you are seeing is real.

Get Out Of My Dreams

Researchers from four countries – the US, France, Germany and the Netherlands – have been able to communicate with people whilst they dream.  And not in an easy “blink if you hear me” kind of way – but answering math problems and deciphering Morse code.  The communication was done a number of different ways:  speaking, Morse code beeps, and tapping math problems directly onto the skin.

I’m fascinated by this topic. The question of why we dream has not been reliably answered.  Some think it is consolidating the memories from the day and some say we are modelling future options or decisions.  I am intrigued by the idea raised by David Eagleman that dreaming is keeping our neurons busy while we sleep.  For people who go blind or deaf the neurons that are assigned to sight or hearing are quite quickly assigned to other tasks when unused, so if we were shut down for 8 hours with no dreaming would we lose some abilities?

Could this new technique allow our dreams, or more importantly, our nightmares, to be altered in real time?  It may be useful in therapy for people who need to confront fears and deal with PTSD. Could I learn how to speak Spanish whilst sleeping?