Researchers have found a way to deliver cancer-fighting drugs into the brain through the use of microscopic robots. As usual it’s the poor mice that have taken the early chance, but the potential for human brain treatment is incredible.

The blood-brain barrier is an essential protector for our brain from external pathogens.  However it also makes it very difficult to treat diseases like brain-tumours, as it separates anything in the bloodstream from the brain. An “all-out” assault treatment may not work, so a team from China led by chemist Zhiguang Wu had to resort to a tactic much like the Trojan horse used by the Greeks. But this time to deliver something that will actually help!

To break in, they coated the microbots using bits of E.coli. These microbots were then absorbed by white blood cells thinking they are normal pathogens that need to be destroyed. Once the white blood cell carrying the microbots passes through the barrier into the brain, the robots are then maneuvered using magnets to their intended targets.

From here, they release the medication that would usually not make it into the brain by conventional means. It’s not just brain-tumours though. Wu says that this tech can be used as “a platform for active delivery for the therapy of various brain diseases such as cerebral thrombosis, apoplexy, and epilepsy.”

Who would have thought that we could adopt a 3,000 year old strategy for the benefit of 21st century medicine?

Your Eyes Can Tell Who You Are

Last week I said, “The eyes are the window to the soul”, it was just a light-hearted cliché. But after reading this, you may consider it more seriously.

Eye tracking is now being used across many industries and the technology is getting cheaper and more accessible. Eye tracking is built in to many gaming setups, VR goggles, driver safety tools, and even just to test how effective a website design is.  As we go further into this world it is worth knowing how such eye-tracking tools may inadvertently reveal more about you than you may like.

What may alarm you is that this eye-tracking tech can identify things such as:

The following chart summarizes the information that can be inferred using such data. 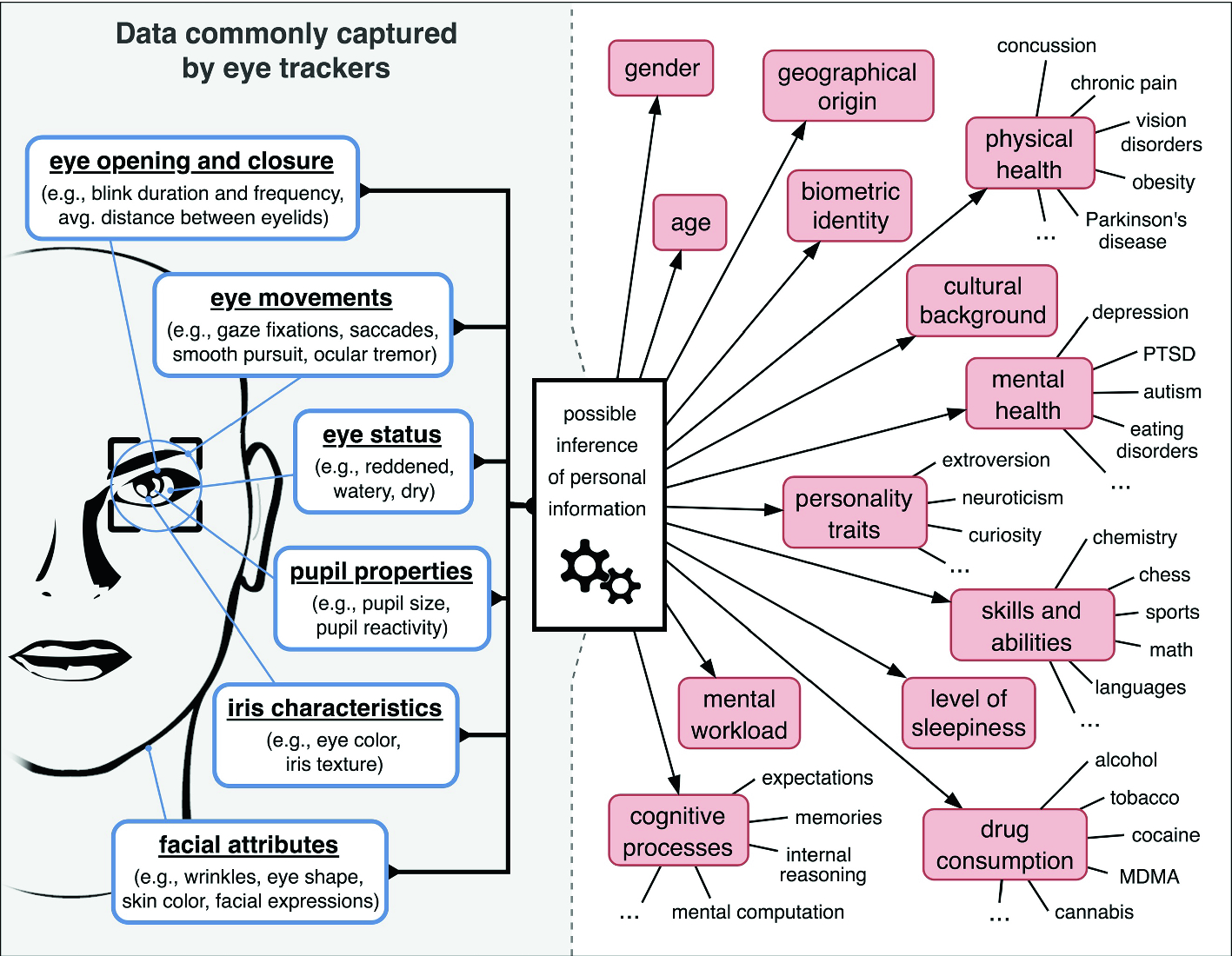 While the threat of you being specifically targeted and profiled using eye tracking tools is low, the fact that such a rich amount of data is available will make it extremely attractive to all sorts of people. As with almost all our wary topics there is potential for both good and evil as this new technology becomes more available.

Keep in mind too that a lot of data today is already gathered without consent. Us techie folk, and the lawyers, will need to ensure detailed consent is received from the user (100 page terms and conditions section anyone?).

Digit – “oh my god a robot just walked up my driveway!”

Ford just bought two Digits – humanoid bipedal robots that may soon be a common sight in your neighbourhood. Digit walks upright, knows when there’s a slope or a step and can get back up again should it fall. And now, Digit may be knocking at your door to deliver the package you ordered online.

Autonomous vehicles are becoming increasingly useful in the transport industry, but they can’t make that final trip up your path and knock on your door. Imagine Digit getting out of an autonomous van and sauntering up to your door with your new running shoes. Maybe they could also program it to have a chat to those poor souls still in lockdown!

Robots have been around for quite some time now, usually performing repetitive and dull functions confined within factories or warehouses. But recently we’ve seen robot dogs, and now Digit slowly integrating into society, wandering around the world. How prevalent will this become? How will you feel about these metallic buddies being out and about?  I’d love to hear your thoughts.  Please reply to this email and let me know.