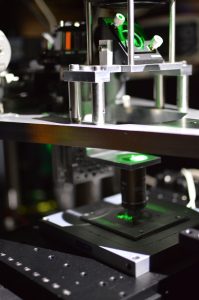 To understand our world we investigate the minute biological structures within it. The most powerful microscopes are light-based, using lasers which unfortunately destroy living cells after only a short time. An Australian team from the University of Queensland has developed a quantum microscope that improves clarity by 35% without destroying the subject. This has revealed biological structures that were previously impossible to see.

The benefits of the quantum entanglement approach are wide-reaching. A better understanding of living things, vastly improved optical imaging, advancements in MRI technology and improved navigational abilities to name just a few.

“Entanglement is an unusual sort of correlation between particles, in our case between the photons that make up a laser beam. We use it to train the photons that leave the microscope to behave themselves, arriving at a detector in a very orderly fashion. This reduces noise. Other microscopes need to increase the laser intensity to improve the clarity of images. By reducing noise, ours is able to improve the clarity without doing this.”

This technique is yet more proof that quantum computing will catapult us over previously insurmountable obstacles in research, enabling discoveries and advancements across many fields.

Tiktok is huge. If you’re over 30 you might not realise just how huge it is. This app has captured a whole generation. It also seems to capture more of you than you are aware of.

TikTok recently updated its privacy policy in the US to include giving itself permission to get users’ faceprints and voiceprints.
“We may collect biometric identifiers and biometric information as defined under US laws, such as faceprints and voiceprints, from your User Content. Where required by law, we will seek any required permissions from you prior to any such collection.”

The statement is vague as to whether it refers to federal laws or state laws. When it says, “where required by law”, it means that in states where there is no law safeguarding biometric information, TikTok can freely collect such data. The update to the privacy policy comes after a $92 million settlement in a class-action lawsuit against the app.

It’s no secret that apps collect data from users but some apps may be more privacy-intruding than others. Before downloading an app review the privacy settings listed in the app stores.  And pay attention to those windows that pop up asking you for permission to all sorts of things. Does that app really need to know where you are at all times? Changing the default settings is all it takes between privacy and having your face uploaded to a server in a foreign country.

Los Angeles to San Francisco in a flying bus in 2024 – shut up and take my money!

OK, regular readers understand my enthusiasm for flying cars. They make so much sense! I do recognise however that congestion will still be an issue when we move from roads to the sky (despite the fact that autonomous flying cars will need so much less space than road cars). Kelekona is getting ahead of this issue with its drone bus, or more specifically, an electric vertical takeoff and landing (eVTOL) bus that can carry 40 passengers. That’s mass transit in the sky. Tickets are expected to start at $85 for a 30-minute route.

The drone bus’s body will be made of 3d printed composite and aluminum. For its propulsion system, it has eight thrust vectoring fans that can work independently. Its battery will be modular. As battery technology advances, the drone bus is able to adopt newer tech. Swappable batteries also mean that a fully charged pack can be easily swapped in when power is running low. As for safety in transit, cameras and radar allow the drone bus to see miles ahead for other aircraft, flocks of birds or even physical infrastructure.

There are now so many companies, many government-sponsored, working on flying car concepts that it is fast becoming a real possibility and not just something that gets written about alongside tired “Jetsons” references. Can you imagine what our world could look like without roads?