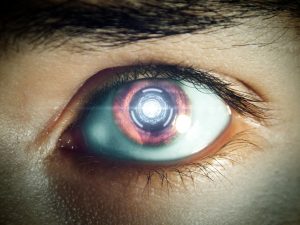 Contact lenses are at the forefront of technology at the moment. There are contact lenses that can monitor your health – detecting things like diabetes or stroke – and there are augmented-reality contact lenses giving you a heads-up display in the real world. And soon you will be able to zoom in-and-out just by blinking.

Researchers from the University of California San Diego have taken advantage of the eyeball’s electrical potential and used it as a signal for their robotic contact lens. Blink twice, the lens will zoom in. Blink twice again, the focus is reset back to normal.

Whilst this tech is cool enough on it’s own, the real discovery here is the ability to use the electrical potential of the eye. The main-game will be to allow people to control robotic devices purely with eye movement. Think of someone who can’t see being able to control a robotic-eye, or a person controlling a remote device using only eye movement. The potential from this discovery is endless!

Have you ever been asked to do an online assessment, play a game, or record a video of yourself answering a question for a job application? You may have been rejected without ever being assessed by a human.

The results in the game you played were analysed and used to determine your risk tolerance and ability to respond to changing situations. Your video was analysed for the words you use, your body language and even your tone. Your results will be compared against data that the AI has been trained on. While this makes the recruitment process more streamlined, that data may actually work against some applicants.

“All machine learning works in the same basic way – you go through a bunch of data, and find patterns and similarities. So in recruitment, looking at the successful candidates of the past is the data you have. Who were the chief executives in the past, who were the Oxford professors in the past? The recruitment algorithms are going to pick out more men. The risk is that if you don’t put in strong tests, women and people of colour are overlooked.”

Bias in AI is one of the largest challenges facing AI creators. Progress is being made, but relying solely on AI to reject job candidates has been problematic in the past.  Its no surprise that Amazon failed early on this, and then no surprise they were one of the first trying to fix it.  This is certainly an example of using technology too much and too soon.

Remember this scene from Star Wars?

We’re getting close to something similar: racing flying cars!  Is it a plane? Is it a drone? Is it a flying car?  I’ve been confused by the difference between these for a while and the line between flying cars and drones is getting ever more blurry.  “Passenger drones” seem the way of the future, with their self-flying ability and vertical take-offs and landings. Whatever it may be, Australian-based Alauda Racing is set to hold the first flying car race this year. Meet the Airspeeder series: This is an electric vertical take off and landing (eVTOL) vehicle that is born to race. Its 96 kilowatt powertrain accelerates you from 0-62 mph in just 2.3 seconds – in true racing fashion.

This year, the company plans to hold unmanned flying car racing (much like drones) due to the safety measures and legislation they need to abide by. But we won’t have to wait long because the real deal – electric racing with drivers onboard is slated for next year!

While it looks like a beast in straight line acceleration, the Airspeeder is also nimble like a Formula 1 car and able to make sharp turns even as it flies over obstacles. Replaceable, customisable, battery packs mean customizing the Airspeeder according to track conditions is a tactic much like fuel-loads and tyre-types in current F1 racing. And who knows, maybe someone out there is already designing “optional” laser turrets to gain advantage in a race.